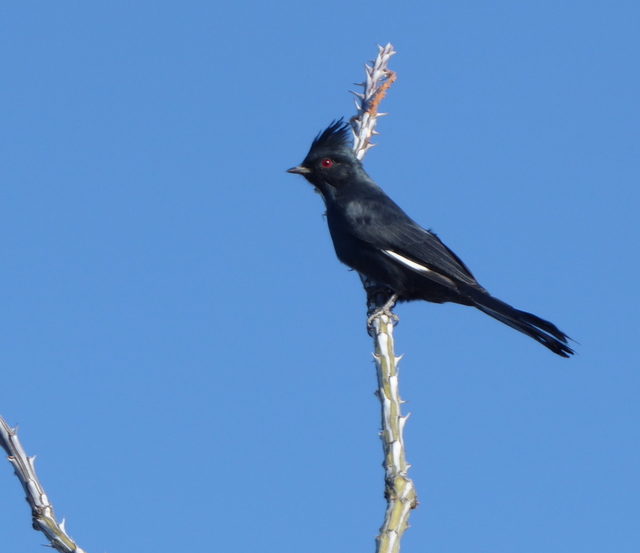 If the population of Pepsis wasps (Pepsis formosa) this year is any indication, tarantulas will be an endangered species! 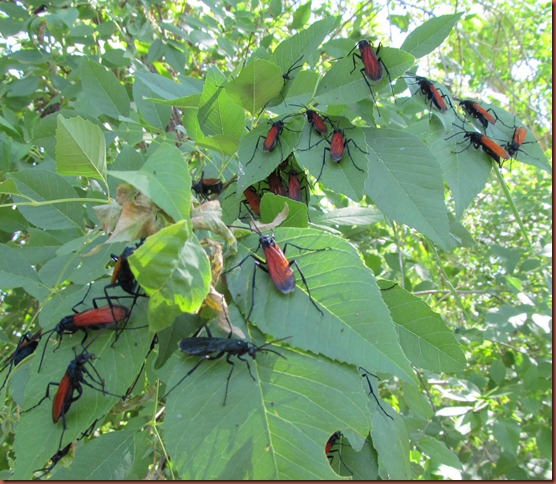 They seem to be everywhere, covering trees, seeking shade and nectar.  With it’s blue-black body and bright, iridescent orange wings, this large wasp cannot be missed.  Pepsis wasps are also known as tarantula hawks for their habit of preying on tarantulas – not for their own food, but for that of their larva.  The female Pepsis wasp seeks out tarantulas, either on the ground or by coaxing the spider out of its burrow.  She then stings and paralyzes the tarantula, drags it into a burrow, lays an egg on the tarantula and seals the burrow.  Upon hatching, the wasp larva has a ready-made meal in the still-living tarantula.  Gruesome?  Perhaps, but it is just part of the daily struggle to survive by every creature.  After about 30 days, the wasp larva will pupate and later emerge as an adult. 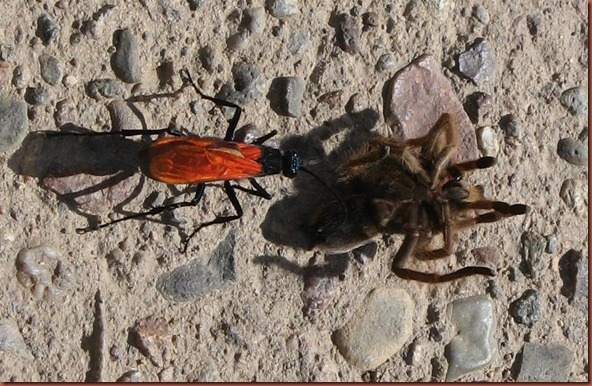 Although there are 15 species of Pepsis wasps in the U.S., P. formosa is the most common in Tucson.  The warning coloration (aposematic) lets potential predators know to beware!  Eating this meal will be painful!  Although they are not aggressive, the sting is known as the most painful of any insect in the U.S.  Two predators who ignore this warning and successfully prey on the tarantula hawk are roadrunners and bullfrogs.
Most commonly seen in the summer, even Pepsis wasps will avoid the hottest part of the day by gathering in cool, shady areas, such as large, leafy trees or shrubs.  The adults feed on pollen and nectar and huge concentrations of them descend on flowering soapberry trees, Mexican crucillo bush and other desert species.

Male Pepsis wasps have been known to engage in ‘hilltopping’ – perching on high sites to watch for receptive females.  Remind you of anyone?  Generally, males might live 2 months, while females have a longer lifespan.

I’m rooting for the tarantula to escape the fate of meeting a Pepsis wasp, but the huge population of the wasps this year does not bode well for the spider.
Posted by Carole at 7:49 AM

I welcome your comments, but those from Anonymous users, or those including links will be immediately reported as Spam to Blogger and will be deleted. Thanks for your understanding.

My Photos and Other Links 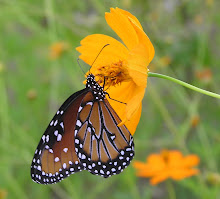 A queen butterfly nectaring on cosmos